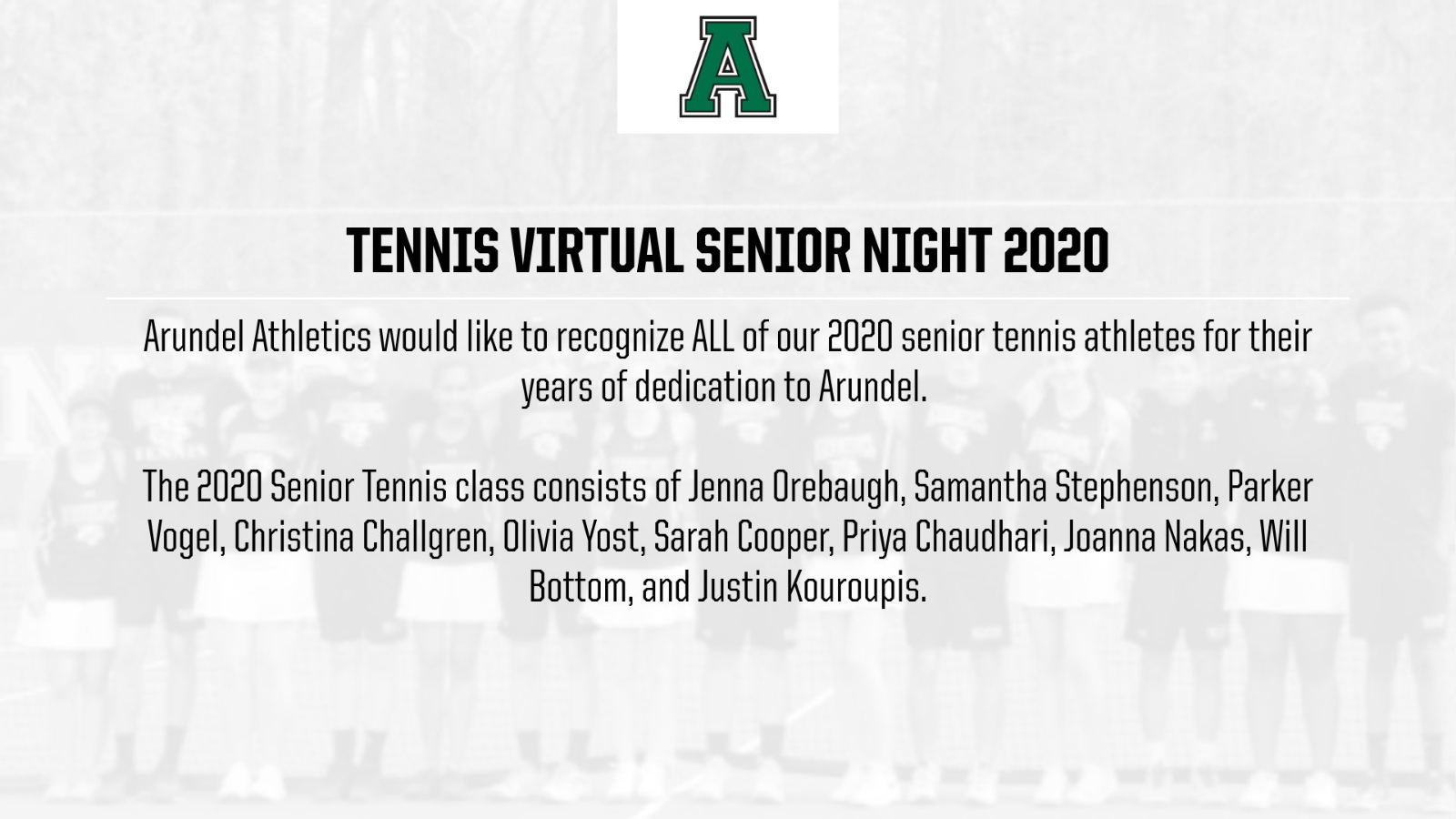 Today, we honor our 2020 Tennis Seniors.

The 2020 Senior class for the tennis team consists of several determined athletes.

First up, we have Jenna Orebaugh. Jenna is a four-year letter winner at Arundel for tennis. Jenna’s favorite thing about tennis is that she gets to beat up on the boys when they think that she is weak. Her future plans include going to Towson to play club tennis.

Our second member of the tennis team is Samantha Stephenson. Samantha is a two-year letter winner in tennis. Her favorite memory is being subbed in to partner with Priya in her junior year. She loves this moment because, even though they lost, she was proud of how they played. She will attend Stevenson University in the fall.

Next, we have Parker Vogel. Parker is a two-year letter winner at Arundel. Parker’s favorite memory is winning his first Varsity match against Glen Burnie in a number two singles match. He’s planning on attending UMBC for a master’s degree in mechanical engineering, and from there becoming an Imagineer for the Disney Parks.

Now we have Christina Challgren. Christina is a three-year letter winner at Arundel who loves that tennis is both an individual and team sport. Her walkout music is Ball for Me by Post Malone because she listened to it before every match her first year playing at Arundel, which was her best year and she went to regionals.

Next up is senior Olivia Yost. Olivia is a four-year letter winner at Arundel for tennis. Olivia’s favorite part about tennis is the strategy that is involved in each point. When asked about her favorite Wildcat memory, she responded with “When Sarah’s Subway sandwich flew off of the bench in the middle of a match.”

Now up is senior Sarah Cooper. Sarah is also a four-year letter winner who has placed third in the region. Her favorite Wildcat memory was the last team dinner junior year because the weather was really nice so the team was outside and it was really fun hanging out with everyone. Sarah plans to attend Salisbury University and major in exercise science

Here is senior Priya Chaudhari. Priya is a four-year letter winner who plays both singles and doubles. Like many other teammates, Priya’s favorite memory is that last team dinner last year. When asked about what she likes about tennis she said, “My favorite thing about tennis is playing doubles, and being able to create a relationship/connection with your partner.”

Now we have senior Joanna Nakas. Joanna is also a four-year letter winner in tennis. Her favorite Wildcat memory is any bus ride home from a tennis match. She loves how close people are on and off the court. Joanna plans to attend a four-year college and earn a double major in Computer Science and Business.

Two of our tennis seniors were not recognized today: Will Bottom and Justin Kouroupis. Arundel Athletics would like to thank them for their contributions throughout the past four years. We will be holding a make-up night to honor any seniors that have yet to be honored. Please have the senior contact Coach Woods through email or the Google Classroom set up for this. 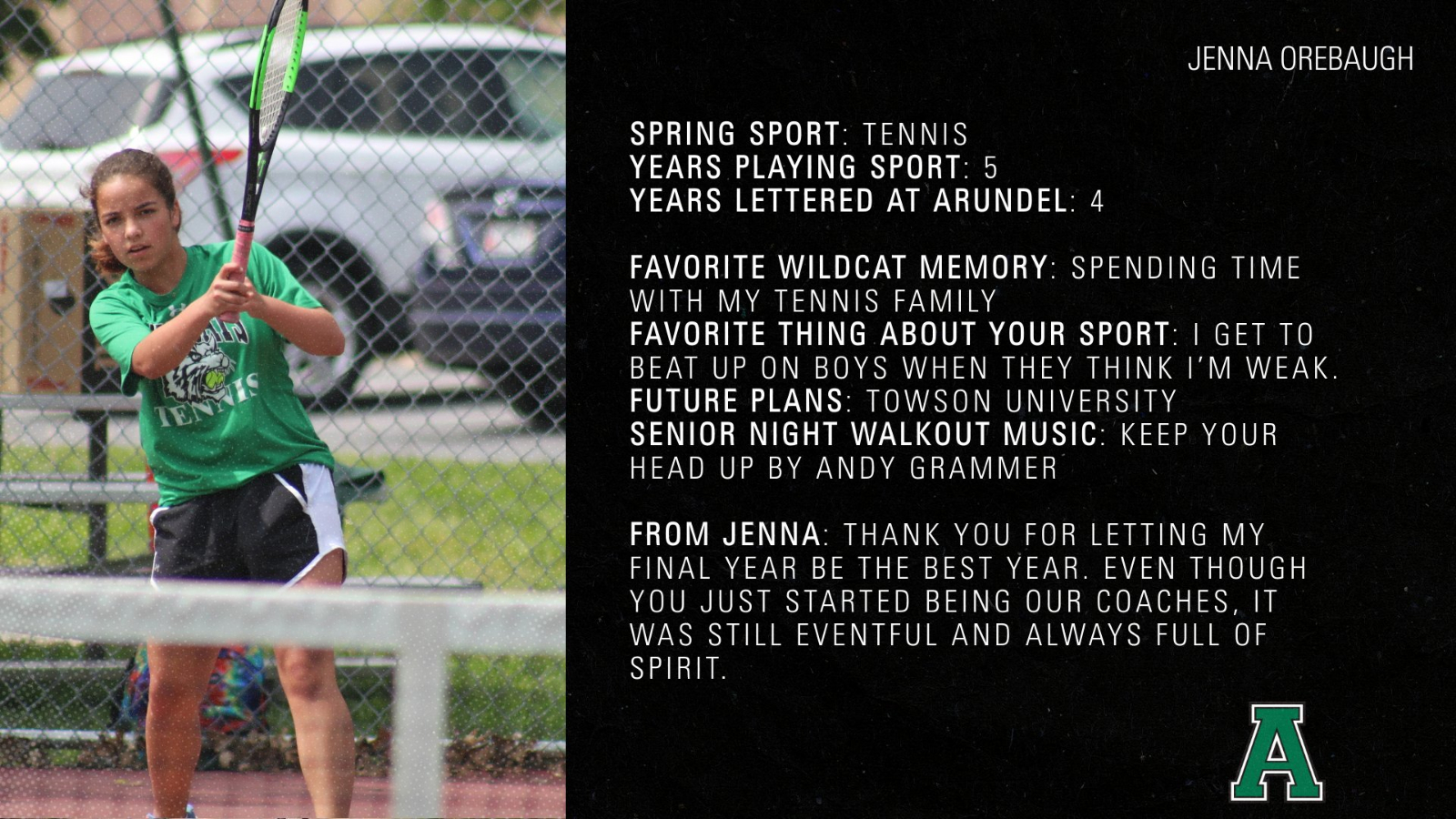 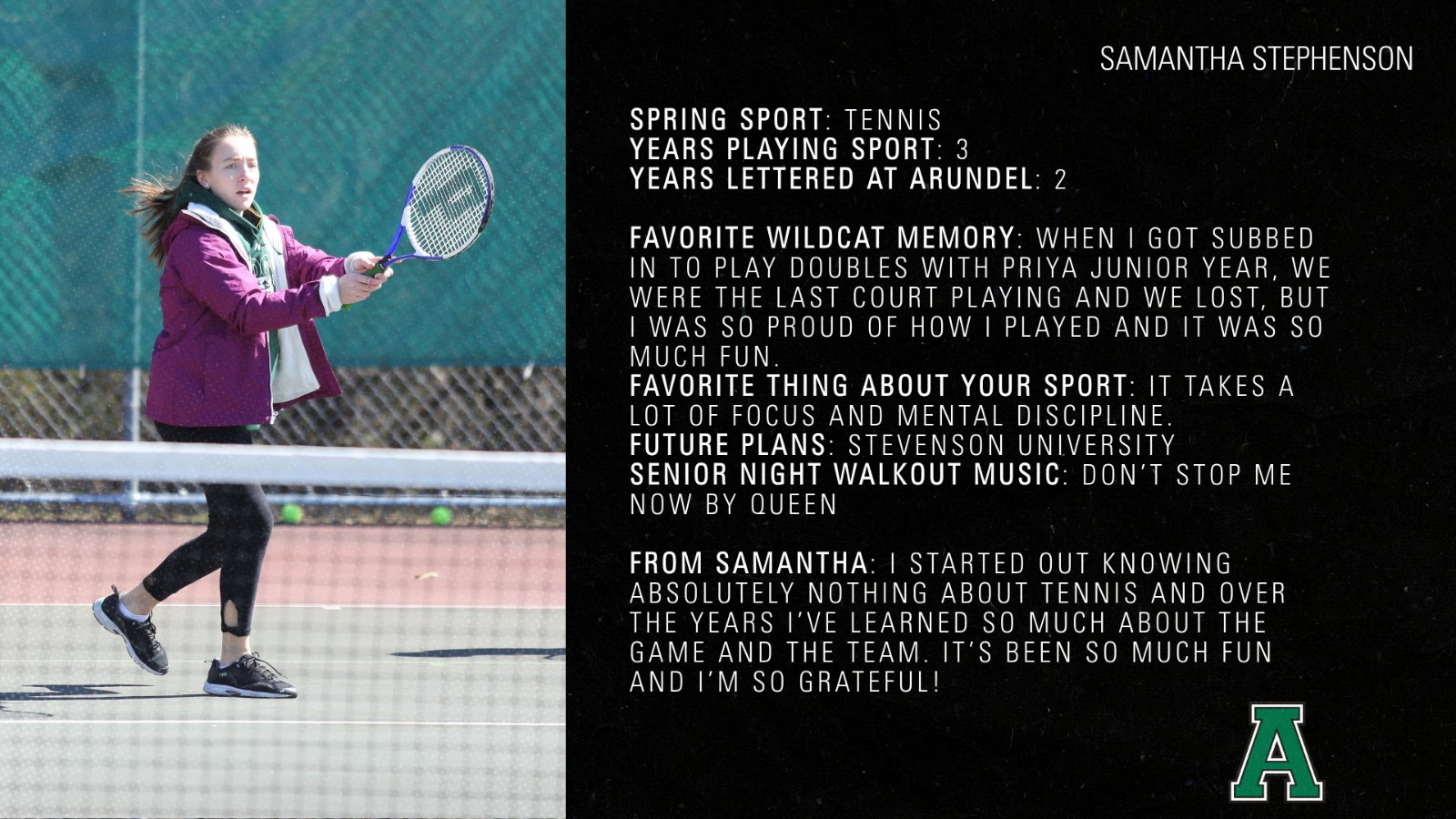 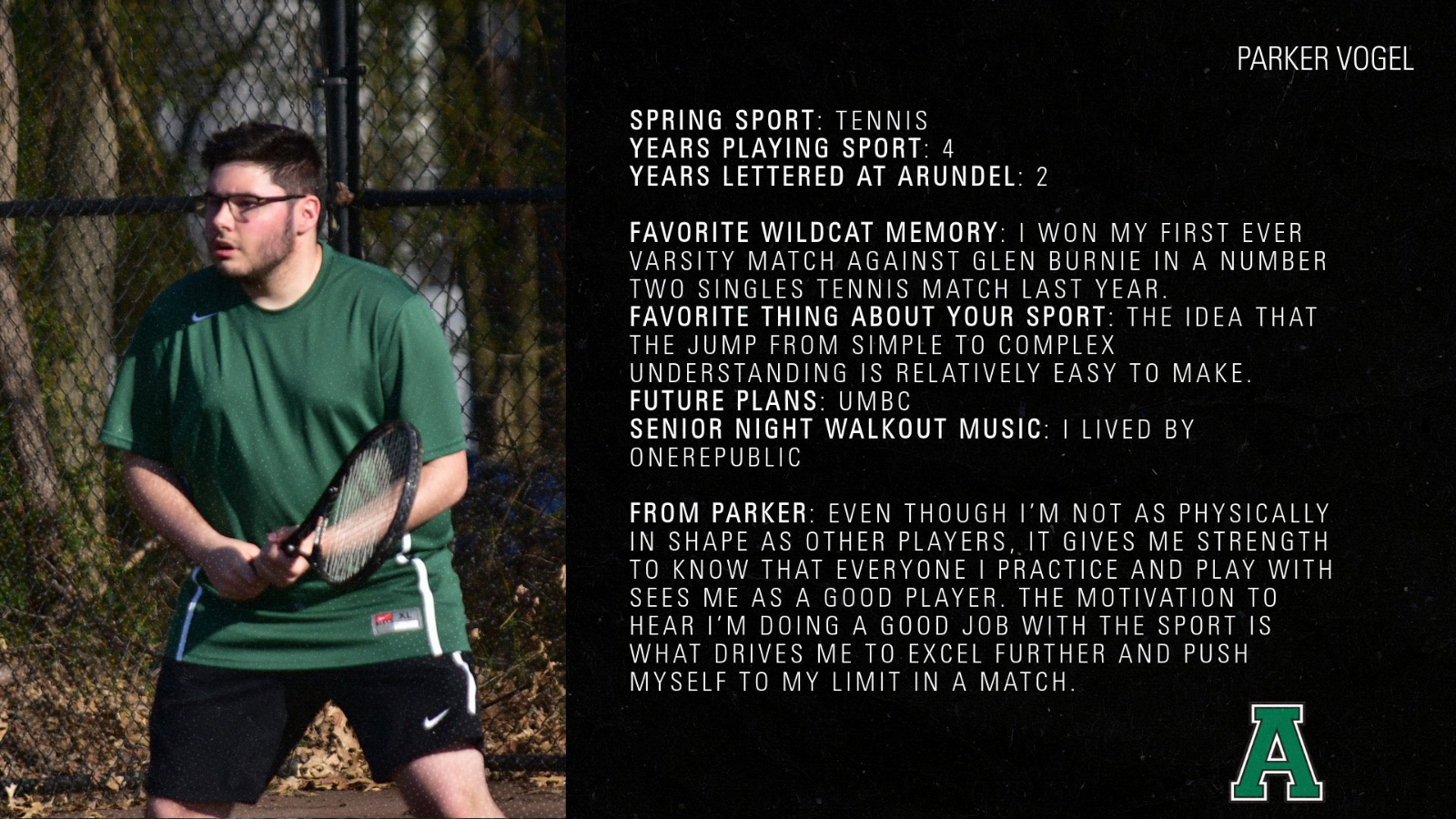 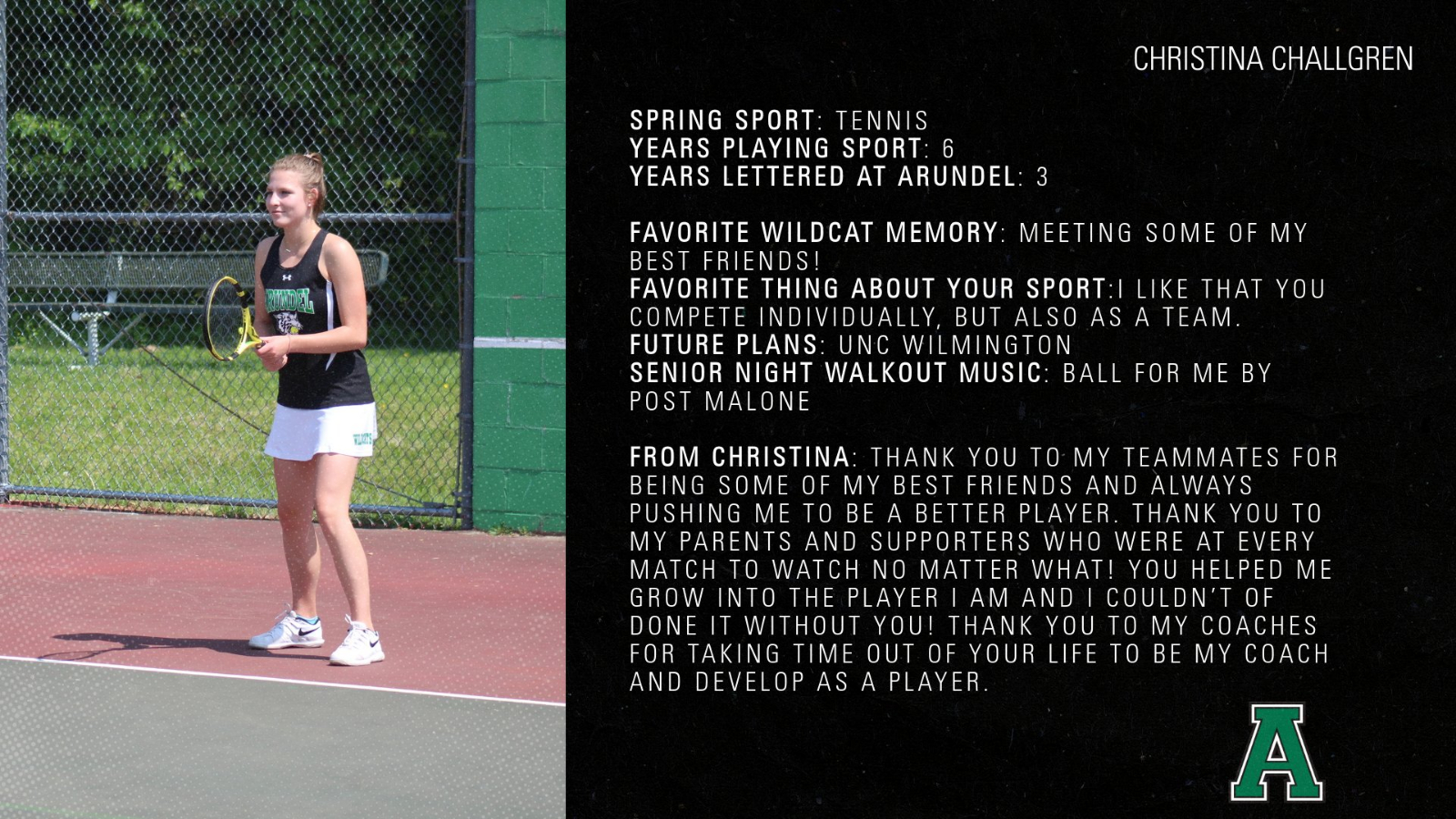 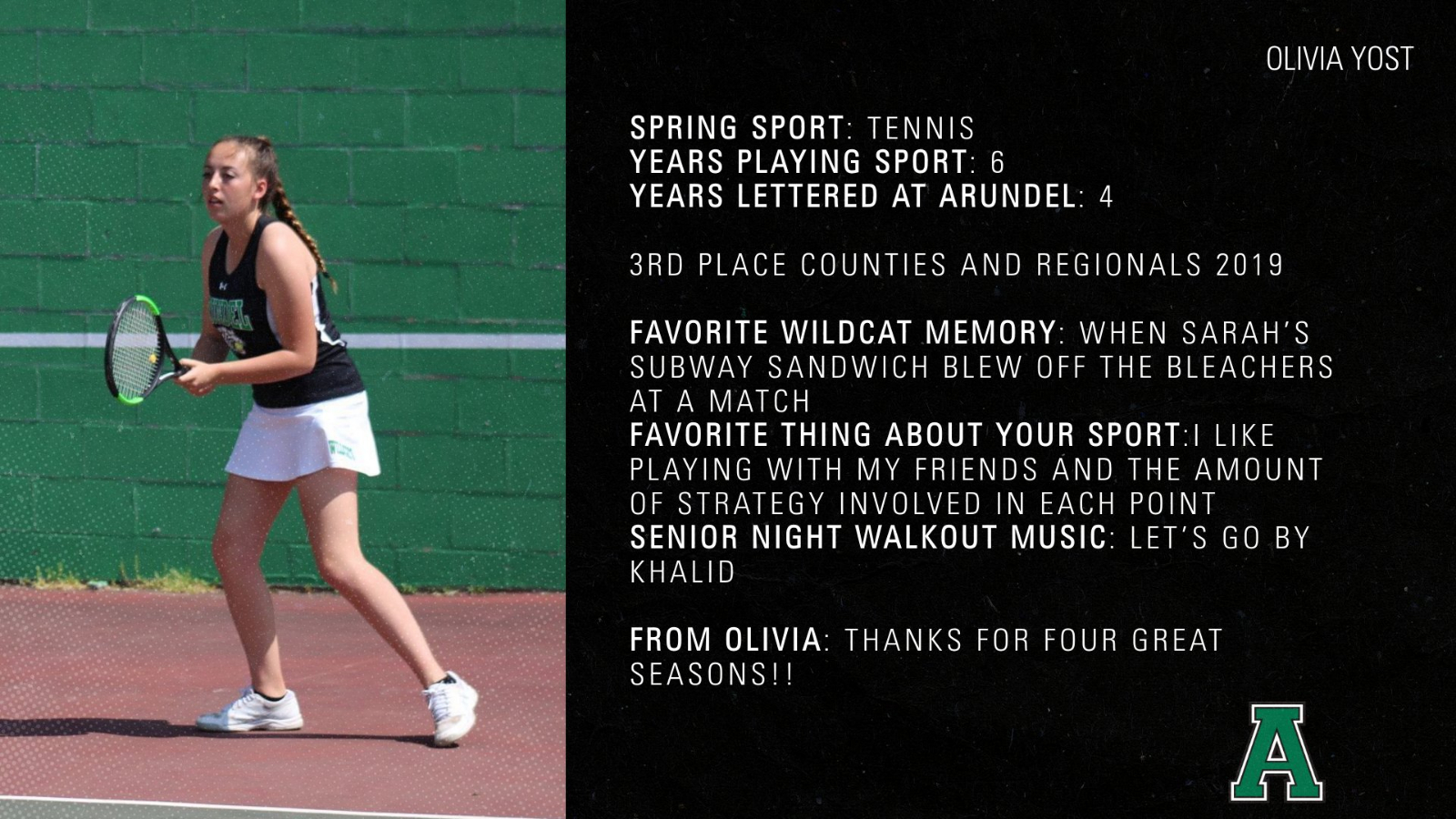 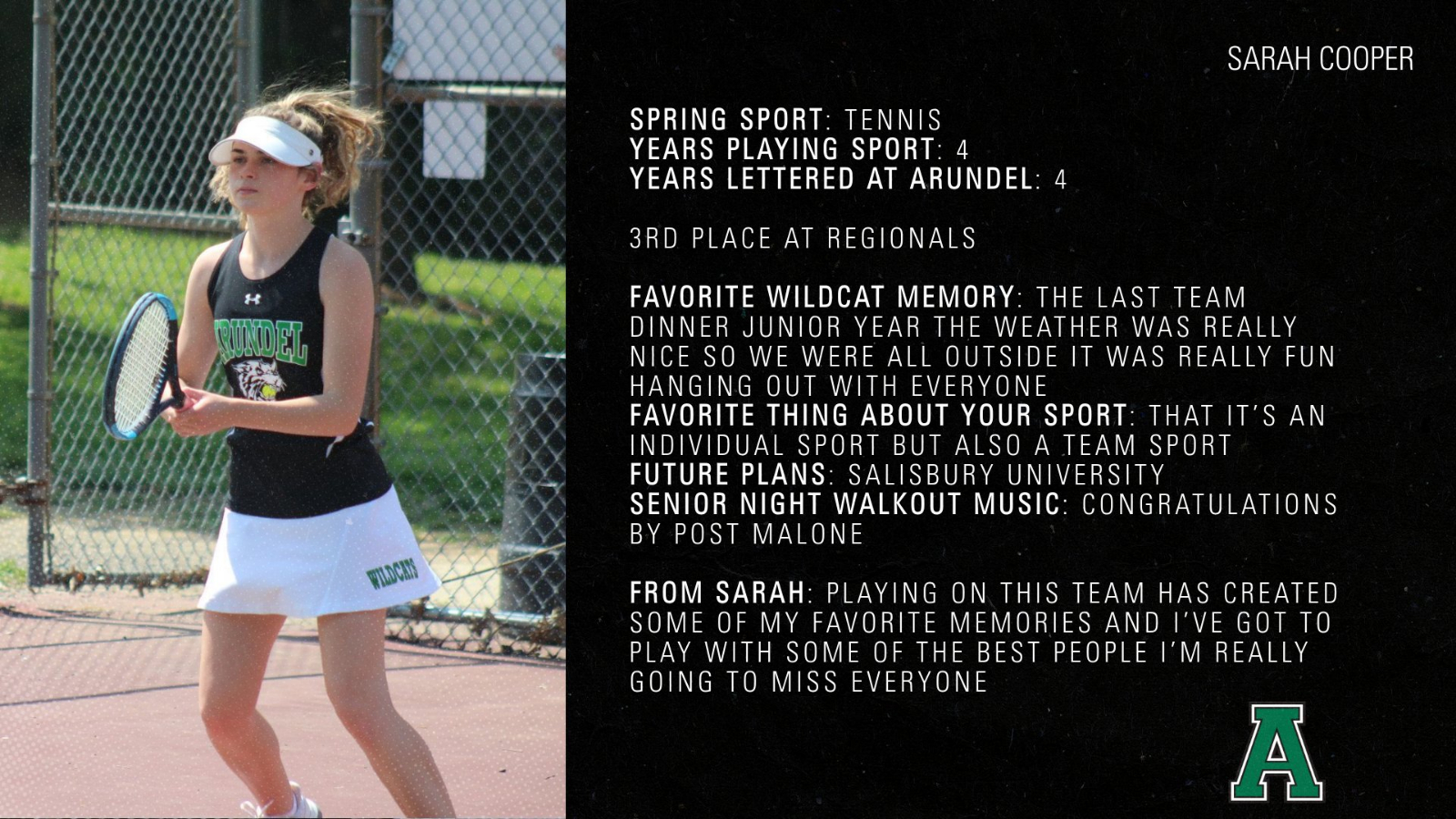 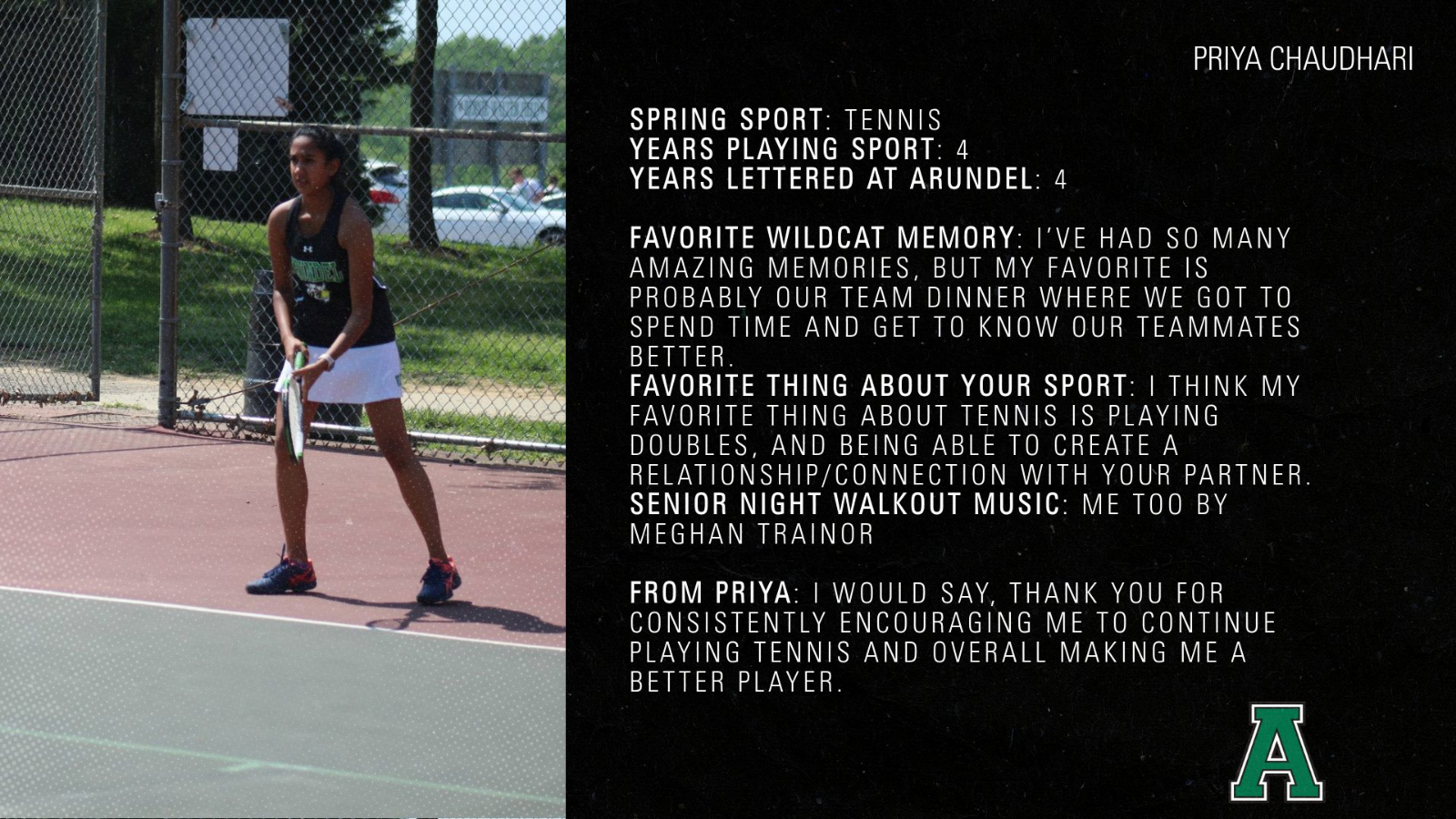 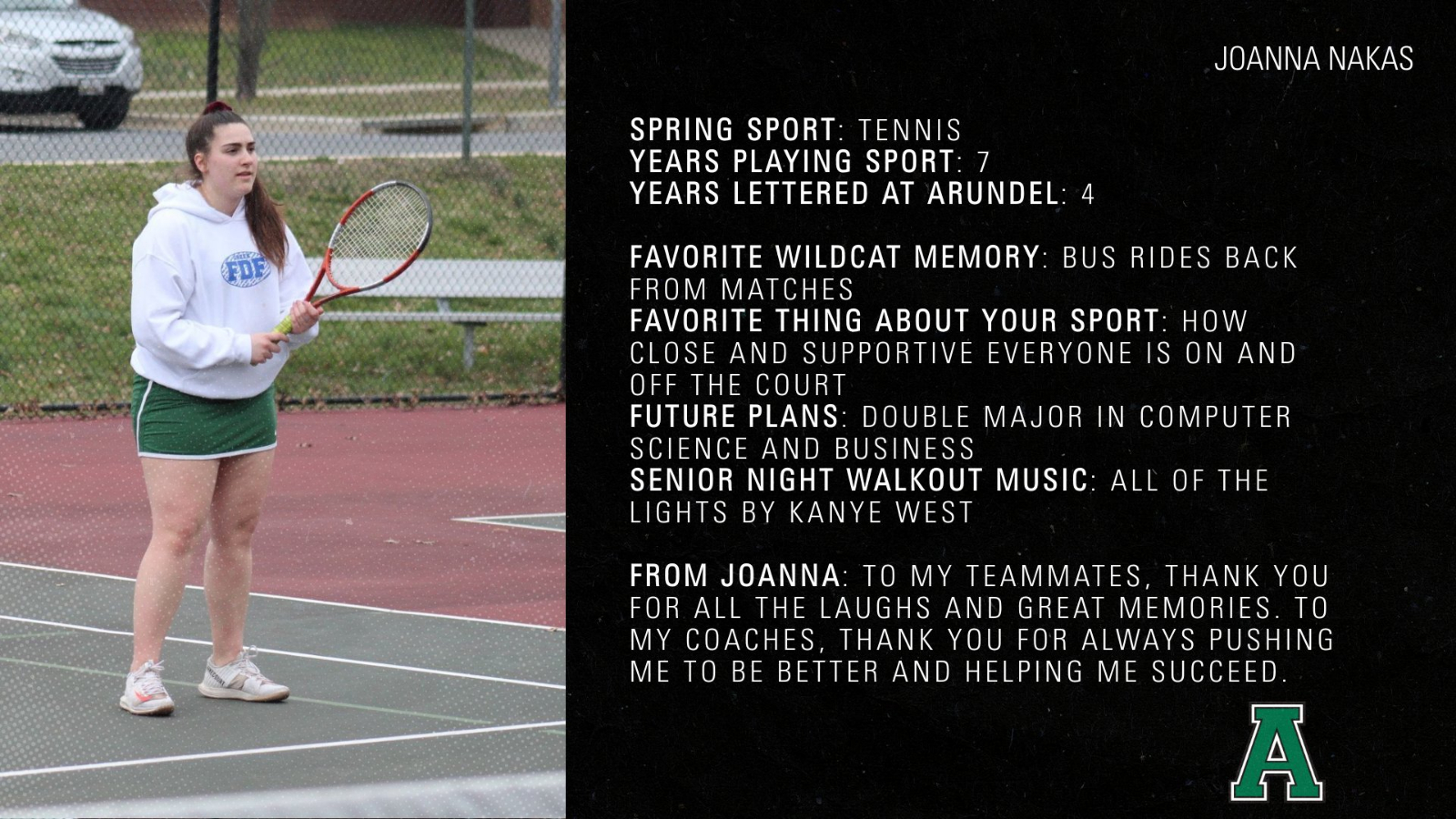