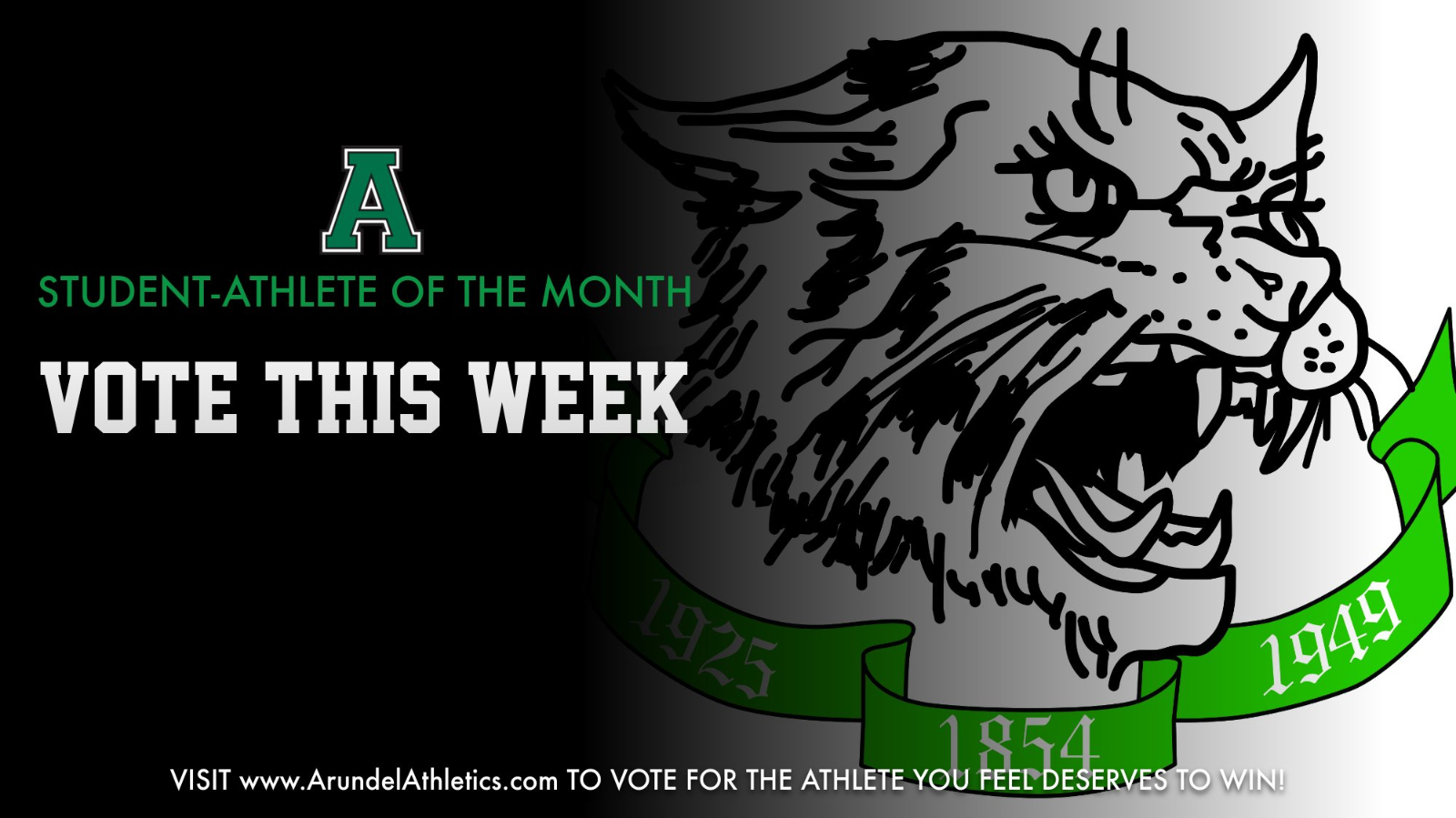 We have begun honoring student-athletes every month BUT we need your help. Below you will find information on several of our Winter Athletes at Arundel High School. Please read through them and decide which athlete you feel deserves to win the new “Athlete of the Month” award at Arundel High School. The winning athlete will receive a new UA Bookbag, a “WE ARE ARUNDEL” long sleeve shirt and recognition on our upcoming “Athlete of the Month” board going up in A-Hall within the next few weeks. These student-athletes were nominated by their coaches.

Here are your February candidates:

Tim Ford- Wrestling
Tim is one of the hardest working student-athletes both in the practice room and outside of it.  He is always working to improve and prepare his body for the physical challenges he faces.  Over the past few weeks, Tim has sustained a couple of significant injuries that would have sidelined just about anyone else for a very long time.  Tim worked at all times doing whatever he could to let his injury heal but also keep himself in shape as best as possible.  On the day of his return to action, Tim was asked to help the varsity team by filling in a weight class.  He wrestled a very close and tough varsity match helping to keep the overall team score close, which proved to play a big part in the team win against Southern that night.

Brannon Labra- Winter Cheer
Brannon is really coming into his own as a cheerleader. He has gained much-needed experience moving to the varsity level this winter and he is now flourishing. He is often a fan-favorite during competitions as a flyer. Brannon can be found working extremely hard during practices each day.

Hafis Upshaw- Indoor Track
Hafis worked hard all season, earning a County Championship in the 55m dash, 300m dash, and 4X200m relay. He committed to working hard and earned a regional championship in the 300m dash and 4X200m Relay. When Hafis earned those victories, he needed to keep working hard and brought home a State Championship in the 300m dash and earning 5th in the 55m dash. Since he came to Arundel, he has been extremely unselfish and displays this attitude to all of his coaches and teammates. He has a great outlook on life and shares this will everyone on his team.

Matt Arter- Swimming
Matt has worked hard as a team captain this year. He has worked with many members of the varsity swim team to improve their stroke and times in the water. He has also broken two school records for the swim team. He broke the 100 backstroke relay and was part of the Men’s 200 Free Relay. He was a great leader throughout the entire swim season.

Heather Middleton- Girls Basketball
Heather is often one of the first players in the gym for practice. For the month of February, Heather has been one of the teams’ most consistent players. She has become a multiple position player as a guard and small forward. This has been instrumental in helping the girls have a successful season. Her versatility has made her an inside/outside threat and a welcomed asset.

Quaadir Spence- Boys Basketball
Quaadir Spence is a great student-athlete on and off the court. He’s a great kid; he’s very easy to coach.
It’s not easy being a point guard and leading a team, but he leads the team well. He is reliable day in and day out, not just some of the time. You can count on him to get the job done, meet deadlines, keep his word and provide consistent quality work.

Vote as many times as you would like, just revisit this article and/or refresh this page! Voting has opened up and will end on February 29, 2020, at Midnight. The winner will be announced on Monday, March 2, 2020.